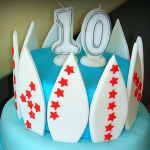 On May 5, 2013 LinkedIn celebrates its 10th birthday. It now has more than 200 million users, roughly half of whom are in the United States. Every second, two more professionals join LinkedIn. If you’re not a member, it’s time to sign-up. If you are a member but are not active, it’s time to participate. If your company doesn’t have a branded corporate page, it’s time to create one.

Of all the social networks, LinkedIn is likely to stand the test of time. Our two sons demonstrate why.

My older son, now 22, asked me upon graduating from college last summer, “Dad, do you think joining LinkedIn would help me find a job?” He’s now a LinkedIn member with 54 professional connections, and yes, it did help him find his first professional job.

My younger son, now 19, is a freshman in college and, maybe surprisingly, he doesn’t use Facebook. “That’s for my older brother, my parents, even grandmother.

How un-cool could Facebook possibly be?” He’s not alone. While it’s got an astounding number of members, Facebook participation in the US actually dropped in February and March — by almost 1.5 million people.

However, as a business school student, our younger son is seriously into LinkedIn. And so are all of his classmates, in part because one of his professors tied their grades to developing at least 25 connections of future use in the professional world. That’s one great professor.

By the way, unlike Facebook, LinkedIn had a very successful IPO two years ago. After finishing 2011 at 30% above its initial offering price, LinkedIn’s stock price has subsequently tripled. I imagine that morale there is off the charts.

But LinkedIn is about far more than finding a job. It’s like Google, but for finding people; people to learn from, people to hire, people to sell to, and people to partner with. LinkedIn’s single best feature is “Advanced People Search”, which I’ll discuss in detail in the next issue of TEQ.

First, what’s up with all these people suddenly endorsing you? I’m not talking about the “Recommendations”. LinkedIn has had that feature forever and it’s rarely used unless someone is looking for a job and asks someone else to write a recommendation for them. 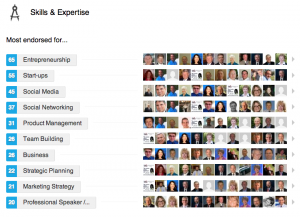 No, I’m talking about the new “Skills Endorsements”. It seems that virtually every day someone new is endorsing me (and you). I think this feature is a great addition to LinkedIn, although most casual users are still confused by it.

Here’s why it’s important. When you or anybody else signs up for LinkedIn, you’re asked to list your skills. You probably don’t remember doing this because it was a day one activity, not repeated thereafter.

The problem with the collective lists of our skills is that they’re all self reported. In a world where resume padding is legendary (remember the CEO that Yahoo recently hired and then fired), how valuable is a self-reported list?

Since about six months back, whenever someone views your profile, LinkedIn poses a question: “Does John have these skills or expertise?” LinkedIn then presents five randomly selected skills from among those you claimed, offering the viewer the opportunity to “endorse” or “skip” any or all.

Think about it. A given professional associate may not have a full view of your skills, but when everybody weighs in, that is likely to be on target. What am I more likely to believe about you, the skills that you claim or what everyone else says? See how this makes LinkedIn’s personnel data more valuable?

Addressing one other mystery, I’ve frequently heard people say, “There’s no way that Jane Smith would have viewed my profile.” Indeed, she may not have, but if she viewed and endorsed someone else, LinkedIn then displayed four of her connections listing one skill for each and asked “What skills or expertise do your other connections have?” If this happened to you, you were simply chosen at random.

So be careful who you link with. Hint: Stick to people that you know professionally and respect professionally. That’s what LinkedIn advises.

Now, you might want to visit your own profile and see what everybody is saying about your skills. If there’s a mismatch between what you say and what they say, well… there’s a credibility gap. It will be easy enough to change the skills that you claimed. In fact, I recommend doing that immediately.

Or you can work to change people’s impression of you. It will take longer, but just like people’s ratings of restaurants on Yelp, it matters. Whether we run restaurants or are business professionals, we ignore the “world of mouth” at our peril.